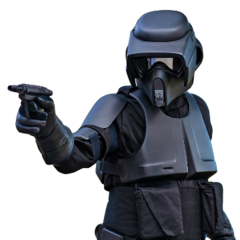 Thanks mate   Here's a preview of the full get up

Yeah. Strapping will be another challenge. I was planning on following some of the regular TK strapping for some areas. I plan on being reasonably active and am hoping that all of the reinforcing I am

Here is a pictorial update with some mildly boring narration:   Thermal Detonator is coming along nicely, this is just after a coat of resin, so will need to be sanded etc     Here is the Back